"Pavlov is Always Sitting on Your Shoulder"

You may have heard that Bob Baily quote that "Pavlov is always sitting on your shoulder."  What does this mean?  Does it mean you have some old, dead Russion Physiologist getting a piggy-back ride from you?  Nope!  What it means is that what he discovered, Classical Conditioning is always at work!  Whether or not you pay attention to it, your dog is making associations automatically, so it's good to know how and what your dog is making associations with.  A Conditioned Emotional Response (CER) is when the association is between a behavior and an emotion.  Keeping this in your mind while training can really help.

Pavlov was instrumental in bringing psychology into the realm of empirical studies.  Empiricism basically means that you can use your senses to make observations.  Before him, psychology, which was a new science, could not be studied in the same rigor as other scientific fields like chemistry or physics.  He showed that the mind could be studied by looking at behaviors.  Because of him as well as Watson and Skinner, behaviorism became very predominant in American psychology for much of the twentieth century (European psychologists were different in that several were focused on ethology instead).  This movement brought prestige to the science of psychology.  Much of dog training can be explained through behaviorism.  However, one must never forget that, as you train your dogs, "Pavlov is always sitting on your shoulder."

The Focus On Behaviors

Of course, there is science in dog training.  In the bare bones level, it is the application of learning theory.  However, the most skilled dog trainers also are showing interest and using knowledge from the new discoveries in the field of biological psychology and evolutionary psychology as well as other areas, which I will explain about in later posts.  Sometimes, people new to training dogs focus on behaviors and forget about the dog's emotions.  This is like how for much of the 20th century, behaviorists believed that there was nothing inside an animal in regards to thoughts and emotions.  These were radical behaviorists.  They believed all behavior was learned.  From learning to dance to learning to speak.  There were several prominent psychologists who changed this view point.  Bob Bailey (who was married to the late Marion Breland Bailey) says "Pavlov is always sitting on your shoulder."  What this means is that emotions always come into play while you are training for an animal's behaviors.  He's telling you to remember CERs.

CERs means that the organism is tying emotions to the event or the behavior.  The classic experiment that demonstrates this is Little Albert Experiment.  The video is nice because it has narration.  Anyways, Watson showed that emotions could be conditioned.  In this case, he conditioned the fear response to Little Albert when Albert was presented with the stimulus of furry objects.  Any emotion can be conditioned.  When training a dog, the method definitely matters.  A focus on behavior can yield a method that could condition negative emotions such as frustration or fear into them.  Minding the emotions during the process of gaining the behavior makes clicker training an obvious choice because the dog is constantly being rewarded and soon find the game of training rewarding.  Learning is giving so many positive emotional associations that the dog loves the game of learning.  Watch the following clips.  Can you tell which dogs were trained using positive methods?

Posted by Nucky at 10:30 AM
Email ThisBlogThis!Share to TwitterShare to FacebookShare to Pinterest

Nucky
Hello folks! My name is Nucky and I am a student of psychology working on self-improvement and loving life. 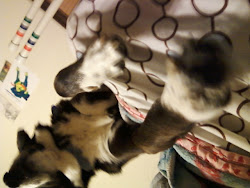 The Chow-Dalmatian mix who taught me so many important lessons in life.